I do a lot of talking to my students and others these days about the importance of being specific in writing and in life. One of the things that’s hardest for me to be specific about, both in terms of cultivating self-compassion around the trauma it brings up to write about it, but also the ways that our society stigmatizes black female experiences of poverty, is hunger — in the physical sense, but also in the emotional and mental sense.

I always say that fall is my favorite season. I love the delicious feeling of the air cooling in New York City, the way the leaves transform from green to marigold. I break out my new boots, my favorite sweaters & my best turkey chili slow-cooker recipe.

But autumn also brings a familiar, old ache in my body, somewhere between my heart and my stomach. My heart longs for what I imagine families or couples or people who belong to broader fabrics are preparing for, but that’s not the whole story of this ache.

Some of the story is that Thanksgiving calls to mind my great-grandmother Patty Randolph, who was Cherokee in South Carolina long before I was even an idea in anyone’s concept of the future, though I’m not certain if she was listed on anybody’s official tribal rolls because of our connection to blackness. (It is, apparently, another inheritance of mine to be a perpetual outsider and I may forever belong to the tribe of misfits.)

Nevertheless, I’m grateful to have inherited her high cheekbones and the scarlet blood that runs hot right beneath the undertones of my skin. I carry her imprint on my face, in my eyes, in my flesh, the same way my mother did.

What I know, what I have learned is that Native Americans have a different view of what harvest looks like, of what the Thanksgiving meal looks like, or should. Still, tradition and ritual are the arms we wrap around the narratives we prefer to inform our legacies in the world. Put another way, at the end of my life, I imagine I’ll look back on moments and highlights and collect the holidays at tables with chosen and/or biological family as those defining moments in which I became more whole. When I found another part of myself that fell away from me when I was young.

To say these parts fell away, too, is a bit passive, even; but to say they were stripped is too harsh. Like I said, the specificity of it is hard.

It’s one thing to tell people that when you were a child you sometimes didn’t eat for days, or that you were homeless sometimes, but what I’ve found is that you can never really explain to another person what it means not to be able to eat three meals a day because there just isn’t food in the house. It’s one thing to say that the UN estimates that 820 million people in the world suffer from chronic undernourishment.

It’s another to explain that if you live at a shelter as a kid with your single mom, you eat when meal times are. If you miss the meal times because the train was late or your mom’s appointment with her social worker ran later than she expected, you might just have juice because meal time is now over. Also, meal time can mean a cold sandwich on a cold day andan ice cold drink.

James Baldwin said it was expensive to be poor. This is what he meant.

I experienced hunger like this: drinking water and sleeping and listening to music and reading books to quiet my thoughts and fantasies and longing for food, wondering about when the next food pantry day would be at the nearest church. Those were the days, between checks or public assistance or money Western Union-ed from my brother, that made the real difference.

Beggars, they say, couldn’t be choosers. I was always grateful, truly. Thankful.

When other people donated food, though, we got whatever was second or third best – canned creamed corn, or canned peaches, or green beans. Mixed vegetables. Canned pork in a silver can with a pig drawn crudely on it. Corn Flakes. It was not for us. It was for some hungry desperate family of two and we happened to be the receptacles, like garbage, which is exactly how I felt for many years.

I can’t even tell you how often I was hungry in this desperate way as a kid – probably two, three times a month from the timeI was five until I went to boarding school on scholarship when I was 15. If we didn’t have money to travel to see our family for Thanksgiving, we went to a Catholic church, a soup kitchen, a Salvation Army with people who only had it slightly worse than we did, since sometimes we were actually living in an apartment when we had our Thanksgiving meals with other homeless people – but sometimes we didn’t.

I mention all of this because the reason I’m a proud member of the Junior Board at the New York Common Pantry is not necessarily because I like the way it sounds, or because I am affluent enough to remain on the board without stressing out a little bit about it, honestly. I volunteer and evangelize onbehalf of the New York Common Pantry because hunger and poverty are like so many other problems in our world — it’s much easier to see and talk in generic terms about what other people should be doing on other continents. But here, in the U.S., in your state, perhaps in your very building, on your block, maybe in your family, there may be someone who can’t afford to buy groceries for Thanksgiving. Maybe there’s a single mom with a little girl nerd like yours truly, and they are living a story just like mine, but they are too proud, too ashamed, too close to the ache to say anything.

The best thing about growing into a different narrative, or many different narratives, is that I can write my story in the service of action. I can do my small part to make sure others don’t go hungry. if you’re reading this, the same is true for you. If it is, here are some ways you can help alleviate food insecurity for some of the 1.4 million New Yorkers who rely on emergency food assistance every year: 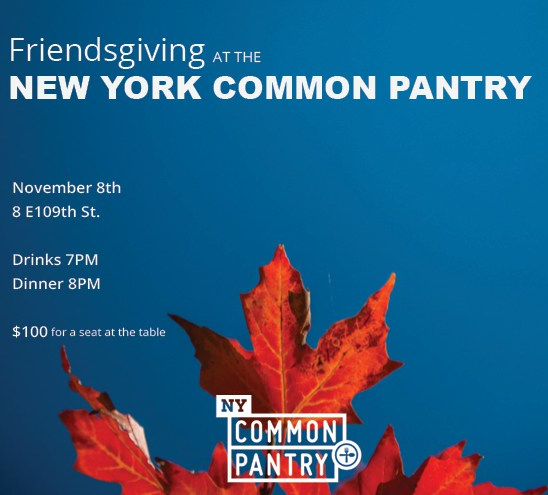 Finally, if you will be in New York this Thanksgiving, or if you have been in the past, and you know of valuable ways to commemorate the third (?) Thursday in November, I’d love to hear them. I’d love to volunteer on Thanksgiving morning or make a new tradition — possibly involving my slow cooker to serve others — but maybe something else I haven’t yet imagined.