Charly Palmer, the wonderful illustrator for I Can Write the World with me at the Ingram Signing Table

We were out of books within 30 minutes – Librarians are incredible!

Sandra held us down when she volunteered to moderate us – Thank you! 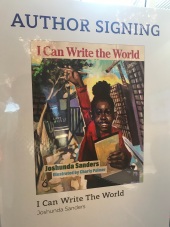 I had a whirlwind weekend launching I Can Write the World at the American Library Association Conference in D.C. Librarians, teachers and others were so receptive to the book that I was the first author in my cohorts to run out of books both on Saturday night at a lovely Ingram reception at Spire and on Sunday afternoon after a great panel discussing the importance of representation in Children’s books. I even got to see a former library professor who popped up in the signing line (thanks for coming by, Stan!).

The most common question librarians had is one that most people ask me, which is “What is this book about?” This comes up right after they say, “Wow, the book is so beautiful!” Which makes my heart sing.

The answer is that I Can Write the World is about 8-year old Ava Murray, who lives in the South Bronx. She is named after the brilliant filmmaker Ava DuVernay and the incredible legal scholar, Episcopalian priest & poet Rev. Dr. Pauli Murray, who created the legal precedent known as Jane Crow and, were the world ready for her in her time, might have had a much easier time accepting what we would call her trans identity in this time.

In I Can Write the World, Ava notices the beauty of the Bronx that she knows and loves is at odds with how journalists often depict her world. On the news, a little girl about her age is fined for tagging, which confuses Ava because she sees the colorful murals around her as making the city more beautiful. Her mother, Kim, explains that journalists are like the window frame around their living room window and they shape what we see when we look out of it. Ava decides that she wants to become a journalist so that she can be just like them and shape the world they see.

The first book in the series has Ava exploring more of hip hop culture and how it came to be through a prose poem. I’m honored to say that one of my writing heroines Jacqueline Woodson has called I Can Write the World, “Lovely and timely.” I hope you will find it to be the same. Thank you so much to everyone who has pre-ordered and shared your thoughts with me about the book. I’d be so grateful if you could also write reviews and spread the word. You can find the book on Amazon, Barnes & Noble and several other outlets.

Next stops for I Can Write the World signings are the Children’s Institute (Ci7) & PrideFest on Sunday — which includes a book giveaway for the first 100 kids.