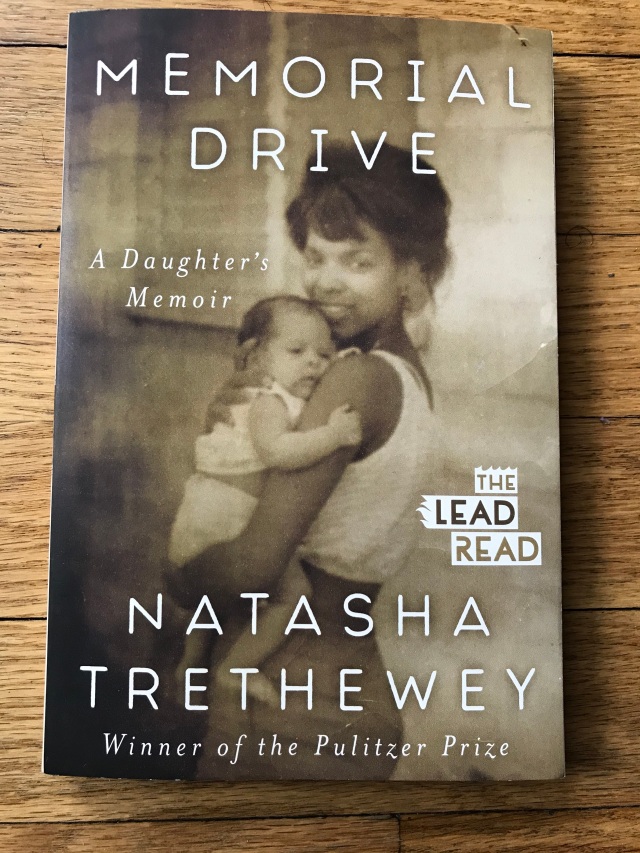 I barreled unexpectedly through Natasha Trethewey’s beautiful and painful memoir, Memorial Drive: A Daughter’s Memoir. I was compelled to finish it quickly the way we are taught to rip Band-Aids off our wounds to ensure that we won’t prolong a stinging sensation, so that we can get on with the healing part and rush through the grief. I explain a little more, too, in my video review on YouTube.

It is not so easy to recover from wounds that involve our mothers, particularly when they do not survive the failings of the world — the world that’s supposed to protect them.

Memorial Drive is the story of Trethewey’s mother, Gwendolyn, through the past and present lens of her daughter’s keen, writerly eye. No detail is spared, which includes transcripts of recorded phone conversations between Gwendolyn and Trethewey’s former stepfather Joel, a haggard, menacing Vietnam War veteran who continually threatens the uneasy peace that opens the book and remains a question mark throughout its pages.

Poets are gifts to us in times of happiness and relative ease but particularly in times of despair, I think, because they can distill what we would normally couch in euphemism down to its essence. In short, they remind us that events are not only what happened but our histories are our active destinies. We can shape them as we wish, but the facts — comforting or not — well, those remain. For women and Black women most of all, there is a way that this power of witness can override the willingness and tendency of others to forget us.

The ache in my heart spread and flourished every time I read a new detail of Joel’s torment of Trethewey, his disregard for her mother or her brother. His manipulation was a knife, twisting and turning with every page; at one point, he breaks the lock to Trethewey’s new gold-edged diary and the violation the poet felt then and perhaps every moment after she had “found her audience,” was so visceral I had to stop reading.

Part of my reaction to the book, of course, is remembering my own mother’s experiences with abuse; the cavalier way in which she would recount having her nose broken by an ex-husband, the way we fled similar boyfriends and sought shelter in homes for what were then called domestic violence shelters. When I posted a review on Instagram, someone mentioned, too, that one of the other aspects of the global pandemic in this moment has to do with a common feature of disasters, which is a rise in intimate partner violence.

The neglect to which my mother succumbed was very different and, besides, you can’t compare one mother’s death to another’s. But what feels the most true here is that I understood that no one was listening to my mother, even when she documented her experience, even when I was a witness. From this, I learned that women were not considered the authorities of their experiences; that even if they were hunted and pursued until they were broken, they would likely not be deemed worthy of protection under the law.

This is a belief I would rather be convinced is untrue. It’s not really in my nature to give into despair. And yet, here is what happens in Memorial Drive, here is what takes the poet three decades to begin to approach & even now, with great suffering and agony: After many attempts to document the abuse and violence and to escape it, Gwendolyn was murdered by her estranged husband in June 1985. Like so many people who have experienced intimate partner violence, she could have been saved — there were so many people warned, so many signs, documented evidence of his threats to her life — and yet, she wasn’t.

This is devastating on so many levels, but especially in Memorial Drive because Trethewey composes the poetry of her extraordinary experience with clarity, grace and generosity while also compiling detail by way of utilizing the economy of every word to perfect effect. As a result, Memorial Drive reads like a classic memoir of grief, like a tragedy in slow motion, the narrative arc, already known, lingers over the text like a set of strings.

One thought on “Book Review| Memorial Drive : A Daughter’s Memoir by Natasha Trethewey”